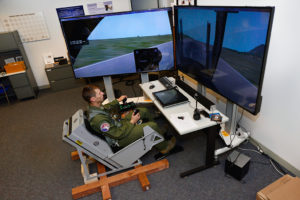 As a result of a Cooperative Research and Development agreement with ACME-Worldwide Enterprises, the Warfighter Effectiveness Research Center at the Academy was given a dynamic motion seat that will help cadets in the study.

“This simulated motion seat allows us to investigate enhancements to our current cadet flight training programs,” said Lt. Col. Christopher McClernon, research center deputy director for WERC. “We can put students through training in the simulator and then test their real-world performance at the airfield.”

Ken Levandoski, ACME’s business development manager, said simulated flight training is a standard requirement for pilots, but the cadets’ research stands out because of the technology’s ability to simulate real-life flight training on the ground.

“When something malfunctions, you really don’t want the first time they feel it to be in a plane,” he said. “The seat will also give you onset cues. Your body will feel that onset so you know instantly what is happening to the aircraft.”

Cadets in the program are on the ground floor of making this technology a reality, said Cadet 1st Class Jordan Read, a systems engineering major.

“It is our job to build the simulator around the chair,” Read said. “We get trained to weld but that’s the thing with systems engineering. We dabble in all areas, but our focus is human factors, where the project largely lies.”

Cadets are expected to finalize their research methods and be ready to study how training with motion cueing affects cadets’ performance in a powered flight class at the Academy airfield.

“The powered flight class takes cadets who have no experience flying, gives them 10 lessons, and then they are expected to fly solo at the end of it,” Read said. “What we are trying to prove is can we get cadets to fly solo at the eighth lesson instead of the 10th.”

McClernon said the published results of the study will be sent to the Air Force Research Laboratory and several Defense Department contractors.

“From those results, we can hopefully build more efficient training systems that are a better use of our tax payer’s money and produce better pilots,” he said.