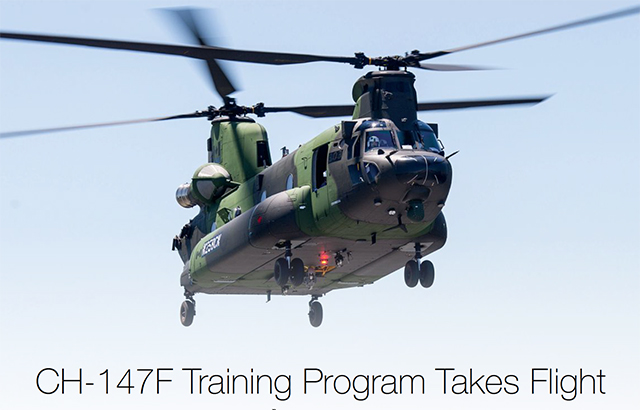 The Chinook “F” training system is significant from a service perspective – it is a foundation of the RCAF Simulation Strategy.

Canada’s Department of National Defense has completed its acquisition of 15 advanced, multi-mission Medium-to-Heavy Lift helicopters, designated CH-147F, the Canadian version of the Boeing F-model Chinook. The CA$5.0 billion acquisition and in-service support program for the CH-147F fleet helps position the Canadian Armed Forces as a first-class, modern, flexible force capable of defending Canada and the nation’s interests at home and overseas well into the future.

Canada took delivery of the 15th and final Chinook in July 2014. 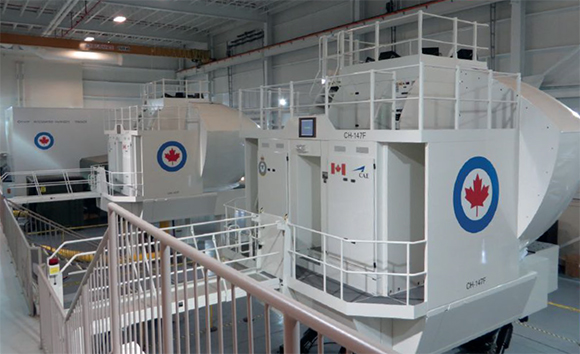 Overview
A collaborative effort between industry and the RCAF customer enables the operation and maintenance of the world-class Aircrew Training Centre (ATC) and Maintenance Training Centre that provide accession and follow-on training for the Chinook fleet’s personnel. The world-class descriptor is not used casually in this instance given the domestic and foreign missions the training system supports. LCol McKenna explained that his squadron can contribute CH-147Fs to his service’s aviation battalion, which may operate at home or deploy overseas. “One expectation is that we may need to sustain rotation after rotation, much like we did in Afghanistan for instance. So I must have a depth of field in terms of qualified and trained aircrews,” he said. The ATC was declared ready for training last September 24, three weeks before this author’s trip to the garrison. The Maintenance Training Centre opened some six months before that. Technician and aircrew training were in progress during this visit.

About 80 contractor personnel are on Boeing- and CAE-led teams at the squadron. Boeing, in its capacity as original equipment manufacturer, provided air- crew and technician initial cadre training, and remains responsible for the maintainers’ training program. For its part, CAE delivers ground-based and simulator based CH-147F aircrew training.

Maintenance Training Centre
The CH-147F maintenance training system combines learning technologies and hands-on training to support a capable rotary aircraft that comes with 30 specific Canadian modifications. Boeing technicians at Summit Aviation, a Greenwich AeroGroup company, in Middletown, Delaware, provided initial“F” model training in structure and engines, and avionics. Last February, two 3.5 month technician accession courses, one in aviation systems and the other in avionics, commenced at 450 THS in Boeing-furnished classrooms and a decommissioned MH- 47E chassis, re-roled into a maintenance training station (MTS), also delivered by Boeing.  The portions of the technicians’ syllabus completed in high-tech classrooms use a mix of technologies including an integrated display screen, essentially a 60-in. touchscreen that fully simulates the Chinook down to literally every screw, nut and wire.

Other maintenance learning is supported on what the 450 THS calls its “16th airplane” – the MH-47E chassis. The chassis is used as an MTS to provide hands-on instruction. The squadron CO added “You can practice the removal of engines, blades, transmissions and other components and do all of the other tasks Chinook technicians do as part of the RCAF Chinook maintenance program.”

General Dynamics and L3 Link are on subcontract to Boeing to maintain the MTS’ tools and parts, and provide other MTS system and materiel support. One maintenance training return on investment (ROI) can be gleaned from this training device supporting instruction for the two courses up to eight hours a day with the potential to surge to 16 hours if needed. Concurrency is always an important attribute of any aviation platform training program. For the CH-147F fleet, Boeing’s Integrated Technical Publication and its supporting technician courseware must be updated within 90 days of an aircraft change. 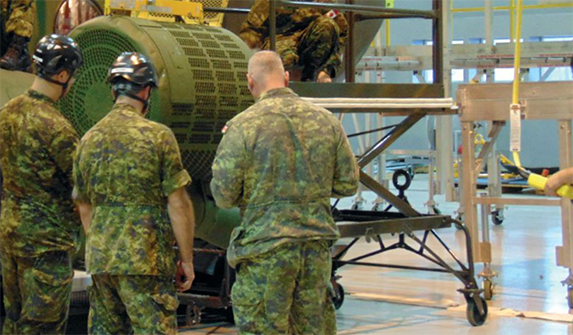 Aircrew Training Centre
CH-147F accession pilots arrive at ATC with a wide array of operational experience. On the high end, that may be more than 2,000 hours in RCAF legacy rotary aircraft, with many of those hours accumulated on missions in Afghanistan. Conversely, other students may be newly minted pilots who graduated from RCAF Phase III flight training with about 230 flight hours. Aspiring Chinook flight officers initially complete a four week ground school, which is very focused on systems and the aircraft mission system in particular. The prospective pilot then completes 4.5 months of flying lessons consisting of 50 sorties divided up between 30 in the simulator and 20 live fly.

“We have a rigorous 24 month process with which we can advance and progress a young co-pilot who graduates from the CAE-delivered course, to get upgraded to aircraft captain,” McKenna said. The CH-147F aviator will have about 600 flight hours at that career benchmark.

Sixty percent of the aircrews’ current syllabus is completed through simulation and other learning technologies; the remaining 40% by live fly missions. Of note, the RCAF designed the CH-147F aircrew training program to be supported up though 95% by learning technology. While the existing instructional mix is self-imposed by the 1 Wing’s leadership, the 450’s commander noted, “We do have all of the device-based lessons. If we wanted to cycle the program further into simulation we can turn up that rheostat to a much higher level of sim, but we need to do a few things first – delivering a couple of courses to make us comfortable with what we are teaching in the sim and on the flight line”. The 450 THS is also about to embark on an effort to gather and deliver flight data for CAE’s use in helping to further increase the amount of training delivered in its four devices.

RCAF has purchased courseware from CAE for first officer, loadmaster and flight engineer training. A gunnery course to begin this spring will prepare loadmaster, flight engineers and even Army personnel augmented for the air- craft protection mission. On the CH-147F community’s horizon, an aircraft captain upgrade course will ensure the individual truly understands the systems in the aircraft. The squadron commander noted, “It is very sim focused. It is also unique in tactical aviation as we have never had a formal aircraft captaincy course. Finally this will be a professional delivery at the right time to ensure the young aviators are at the right level of knowledge and experience before we upgrade them. Normally you wouldn’t find that out until they potentially failed the check ride. Now we will know – now we will absolutely know that when they come out of that captaincy course and when we put them on a check ride that they will succeed.” And finally, a maintenance test pilot course is scheduled for delivery to the RCAF this spring.

McKenna pointed out the Common Database architecture is common to all four ATC training devices, and the training systems supporting the RCAF’s CC-130 Hercules fleet and other aircraft. He added, “Once we are able to enterprise these sims together we will be in the same environment.”

Moog supplied the WST actuators to CAE. A tactical flight training device (TFTD) is identical to the WST with the exception of its fixed-base. LCol McKenna noted that while he loves motion in a training system “the graphics in this device are so amazing that I personally really don’t notice the lack of motion.” The ATC infrastructure housing the TFTD can sup- port the upgrade of the device to a full motion configuration. This enhancement is not currently programmed.

Rockwell Collins UK furnished the mylar domes in the WST and TFTD. The RCAF is taking a page from the playbook of the training systems for the US CV-22 Osprey and other aircraft fleets by field- ing a Deployable TFTD (DTFTD) for the CH-147F fleet. The service invested in the device to sustain the skills of pilots while deployed as well as to support mission rehearsal events. Of note, the device is fitted with a classroom behind the training device to support mission rehearsal activities.

The DTFTD can be transported in one aircraft and can then be setup and operational in 48-72 hours. A 450 THS-initiated, internal proof of concept for the device was scheduled for late 2015 at Wainwright Garrison, Alberta.

A fourth device, an integrated gunnery trainer (IGT), will provide training for door gunners, loadmasters and flight engineers. The 180 x 95 degree FOV system supplements the ability to network the device with the WST and TFDT.

McKenna cited the IGT’s initial ROIs, noting the challenges in obtaining range time for CH-147F live fire events and the cost savings from not using live ammunition. “This is a massive enabler from my point of view. And we don’t think this is only a Chinook device,” leaving open the possibility other type rotary aircraft crews can train in it.

ACME Worldwide provided the IGT’s reconfigurable fuselage and enclosure, lighting, replica weapons, and mounts to CAE. Porta-King delivered the IGT shelter. CAE has provided other technologies to the 450 THS end user. Of particular note, a tactical control center ingrates all four training devices. Additionally, CAE has provided a NVG Simulation/Trainer, four virtual simulation-based classrooms and other products. Night Readiness is a supplier to CAE for the NVG Simulation Trainer.

Training Envelope
The squadron CO summarized how the ATC’s training infrastructure has expanded his community’s training readiness envelope. In one mission scenario, three separate 450 THS crews in three separate training devices can conduct a day/night, three-ship air assault using NVGs. “They are linked in the same environment. They can ‘see’ each other in that same environment. And they can use the IGT sim and plug it into the back end of one of the other three devices and the gunner is now part of that crew. This is a level of mission rehearsal simulation capability I have never seen in my career.”

The squadron commander later reflected on the reality of CH-147F operations – with Chinooks often flying at formation, pilots on NVGs, usually at 140 kts at 50 ft (15 m) above tree canopies, and opened the door for further community discussion on the mix of sims and live flights in the training pipeline. “This is very tactile work. We’re not an airline. And how much simulation you can use to get a guy to that point is up for debate on the world stage right now.” While McKenna asserted that he had never seen simulation “this good” he cautioned, “We can do more but need to get the data sets and decide what more we can do and grow it methodically based on that data.”