Scheduled to enter service in April, the Super 60 is the first HH-60G simulator to incorporate aerial gunner stations on the motion platform, according to Vic Torla, director of the Aircrew Training and Rehearsal Support (ATARS) II program at Lockheed Martin’s Global Training and Logistics division. This will allow gunners to train alongside and experience the same motions as the rest of the flight crew. Previously, crews could only fully train together inside the actual helicopter, a modified Black Hawk that is designed to recover personnel from hostile locations.

The simulator has a visual system of three domes, three image generators and 19 projectors. There is a dome at the front for the pilot and copilot, plus two side domes for the gunner and flight engineer. There is also a minigun on one side and a .50-caliber on the other, allowing the flight engineer and gunner to hang out the windows and shoot.

Lockheed said it could not provide the specific cost of the Super 60, but the simulator is part of the 10-year, $1.1 billion ATARS II contract that was awarded in 2007. The ATARS II contract trains Air Force Special Operations Command crews on 79 crew positions in 18 fixed- and rotary-wing aircraft, including the HH-60G.

Nearly 100 Pave Hawks are in service with the Air Force, Air Force Reserve and Air National Guard, which deployed them to Afghanistan, Iraq and Libya. 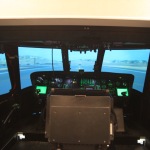 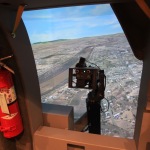 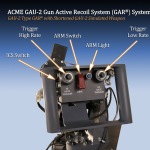 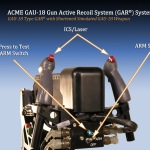 FlightSafety’s HH-60G WST features all the capabilities required for coordinated flight crew training – an FAA Level D simulator including a high fidelity cockpit, control loading, motion, five channel visual, and flight model. In addition, the WST includes two side gunner stations, each equipped with simulated weapons and seven channel visual, and high fidelity crew stations. This provides stand alone, or crew training for the Flight Engineer/Gunner and Gunner positions. The HH-60G is equipped with simulated mini-gun and .50 caliber machine guns, which may be changed from side to side, to further enhance mission rehearsal training. The realism for the simulation of the Guns is further enhanced by the use of ACME’s Gun Active Recoil (GAR), and an Aerodynamic Torque System (ADS). The GAR System allows for realistic recoil of the weapons while firing and the ADS allows for realistic pressures on the gun while in the slipstream of the aircraft. The visual system at each gunnery position is integrated with the main simulator visual allowing the flight crew and the gunners to see the same gaming area. All positions are fully connected via integrated simulator aural cueing including environmental and crew communications.  View on Flight Safety’s Website.