Fighter jets operate in a dynamic world of banks, climbs, dives, rolls, vibrations, shudders, and continuously changing accelerations and g-forces. Pilots experience g-forces as both as an onset force at the beginning of a maneuver and as a sustained force as the g’s are held. Simulating actual g-forces on the pilot body is difficult, but providing realistic cues for both the onset and sustained g-forces is a feature of ACME Dynamic Motion Seats.  View Sample Fighter Cueing Diagram

ACME motion systems provide cueing for both the onset of the g-forces as well as the sustained forces on the crew. ACME’s motion seats provide g-onset cueing through motion channel movements that apply pressure directly to the crew. The moving ‘pans’ in the seat lift or compress together with increasing forces that corresponds to increasing g-loads in the flight model. The moving motion pans also provide sustained g-cues particularly as the back and seat pans compress together adding pressure to the pilot’s back.

Integrated G-Suit System (This System has Mask Air As Well)

G-suits are another way to add very realistic g-cueing. In the jet, crews wear a bodysuit of pneumatic bladders that pressurize against the body to combat the blood-pooling effects of g-forces. Pressure in the suit corresponds to g-forces with greater pressures as g-forces increases.

In the simulator, the varying pressures of the G-suit can be used to provide dramatic cues for simulating g-forces. The varying pressures in the suit provide instant status of the g-loads on the aircraft and provide realistic feedback as g-loads increase or decrease in response to pilot maneuvers. True Q® motion seats can be equipped with an optional pneumatic G-suit system to provide additional g-cues for crews. The system functions just as in the jet and crews can connect actual anti-g suits to the simulator system.

The system uses pressure and vacuum components to rapidly inflate and deflate the G-suit in response to simulated g-forces. And, the same computer that drives the motion seat can also control the G-suit system for one or two motion seats. The system is designed as a complete turn-key system including the compressor, pressure and vacuum, tanks, filters, lines, and necessary valves. ACME’s G-suit system is designed to work directly with ACME’s True Q® Dynamic Motion Seats and can be retrofit onto existing seats or systems too. 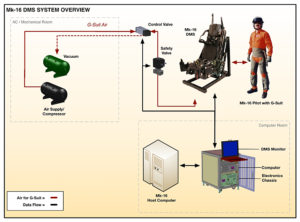 The G-suit system is a great way for crews to train for g-critical events such as emergencies, recoveries, dog-fights, weapon employment, or heavy-weight jet configurations where aircraft loads may be limited. It’s also a great way to train energy management in the jet and eliminates bad simulator habits where crews not exposed to g-cues can hold heavy g’s down to dangerously low aircraft speeds.