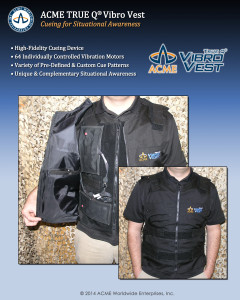 Tactile sensations can rapidly convey enormous amounts of easy-to-recognize information. Tactile cues can inform crews about proximity, direction, importance and more. Information changes based on the pattern, pressure, magnitude, sequences, or location of the cue. For example:

Directional information is conveyed by a sensation at a particular point. For example, pressure to the lower back might denote a threat below and behind the pilot. Or, series of sensations in a pattern such as left to right or up to down might denote direction. One could navigate solely using tactile cues for turning or continuing current path cues.

Importance or Magnitude information can be conveyed by intensity of the tactile sensation. For example, increasing/decreasing proximity to another aircraft might drive corresponding change in the buzzing frequency or pressure applied to the crew. This type cueing could be very helpful for hovering or slow descent in low/no visibility. Another possibility could be to identify proximity or vector to threats—can it see/hear/identify/target me? 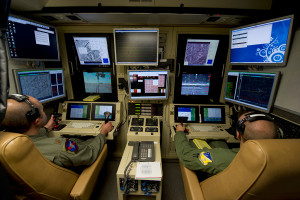 Action information could be conveyed by a distinct sensation or series of sensations. These could confirm incremental steps leading to a specific action readiness. Weapon firing is a good example. A sequence of sensations could confirm weapon and target selection, range, and readiness for firing and when to fire for best effect.

The possibilities are for cueing are endless and could provide cues for any ‘pilot’.

ACME’s VibroVest is designed to provide exactly these types of tactile cues. The vest uses sets of vibrating motors to provide cues to the operator. Multiple motors on the front, back, and side arranged in sets provide full torso cueing. The motor sets can be relocated on the vest to suit customer specific needs. An electronics chassis drives the motors in response to external signals such as from the aircraft or simulator.