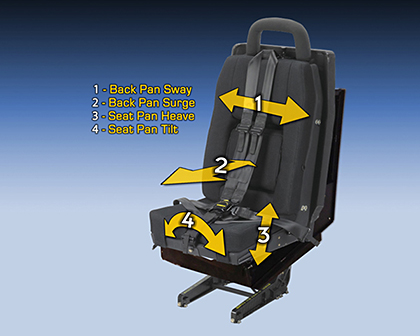 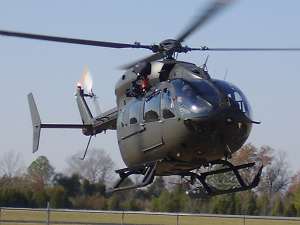 ACME’s UH-72 helicopter dynamic motion seats are a combination of vehicle crew seats with electric motion components built inside the seat. The seats look, feel, and function like actual crew seats, and provide cues to emulate sensations felt during the vehicle or in-flight operations.

The seats use a patented electric system with individual motion plates/pans, providing cues directly to the crew’s body.  It’s the effect of multiple channels in the seat working seamlessly together that provides complete, realistic, immersive cueing.

The COTS core motion system inside is adaptable to any external seat shape or form so we can provide motion seats for nearly any Military & Commercial simulator.

ACME’s True Q® motion seats are an ideal way to cost-effectively add realistic motion cueing to any Sim.  Motion Seats are much less expensive that motion platforms and offer much greater cueing than seat or platform shakers and ACME seats can provide unique cues such as yaw twist simply not available in platforms or shakers.

The Eurocopter UH-72 Lakota is a twin-engine helicopter with a single, four-bladed main rotor. The UH-72 is a militarized version of the Eurocopter EC145 and was built by American Eurocopter (now Airbus Helicopters), a division of EADS North America. Initially marketed as the UH-145, the helicopter was selected as the winner of the United States Army’s Light Utility Helicopter (LUH) program on 30 June 2006. In October 2006, American Eurocopter was awarded a production contract for 345 aircraft to replace aging UH-1H/V and OH-58A/C helicopters in the U.S. Army and Army National Guard fleets.

The U.S. Army’s LHX program began in the early 1980s, proposing two helicopter designs with a high percentage of commonality of dynamic components. One was a light utility version (“LHX-U”) for assault and tactical movement of troops and supplies, the other was a light scout/attack version (“LHX-SCAT”) to complement the growing development of the AH-64 Apache. As the program was developed, the light utility version was dropped and focus was placed on the light attack reconnaissance version, which eventually became the RAH-66 Comanche.

In 2004, the Department of Defense and the U.S. Army made the decision to terminate the RAH-66 program. As part of the termination, the service was allowed to keep the future years’ funding programmed for the Comanche. To replace the capability that the Comanche was supposed to offer, the U.S. Army planned several programs, including three new aircraft. The Army Staff decided that these three aircraft, the Armed Reconnaissance Helicopter (ARH), the Light Utility Helicopter (LUH), and the Future Cargo Aircraft (FCA) (later renamed Joint Cargo Aircraft, or JCA), were to be existing, in-production commercial aircraft modified for Army service.

ACME Worldwide Enterprises Dynamic Motion Seats are in the 5th Generation of evolution.  The product line is robust and well-tested to be used in a high-intensity training environment.  ACME offers a military grade solution for delivering patented motion cueing to any UH-72 Simulator or Part Task Trainer.

The ACME True Q® Dynamic Motion Seat (DMS) is a cost effective method of providing motion cues to a pilot or other vehicle operator. The dynamic seat adds inertial cues experienced in the operational system, whether its an aircraft, ground vehicle or other platform. Motion cues enhance the immersive experience of simulation, enabling better training and operator experience. The Dynamic Motion Seat delivers state-of-the-art performance providing vibration and motion cues in five independent axes of control giving you a full 6 DOF system. It uses three directions of movement – vertical, longitudinal, and lateral plus has differential surge that combines with sway motion to replicate roll. 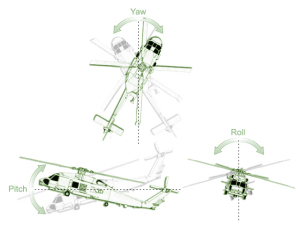 The ACME True Q™ Dynamic Motion Seats (DMS) set a new standard of value in the simulation world. The Rotary Aircraft DMS provides a motion training solution with the highest value including simulated feel of: