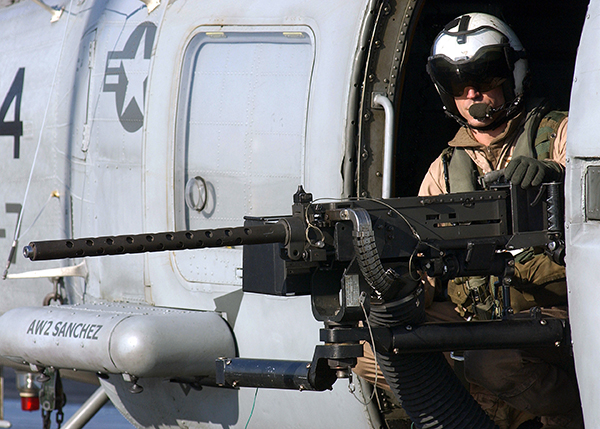 ACME applies variable wind-loading force to the weapons that is proportional to the speed of the aircraft in flight and the airstream angle-of-attack on the weapon.

Remember riding in a car when you were a kid and you would put your hand out the window? You could hold your hand flat and zoom your arm up and down like an airplane. Or you might hold your hand flat against the wind, relax your arm and just let the air blow your arm back.  Those same airstream forces work on the barrel of a machine gun poking out from a helicopter door or window. That 3 or 4 foot long gun barrel is a major windbreak. The airstream on the barrels push the weapon just like your hand out the
car window when you were a kid. And, the faster the helicopter flies and the more barrel exposed to the airstream, the more torque on the weapon. Helicopter gunners must counter the airstream forces. They must overcome the force to sweep the gun onto the target and hold it there. They have to adapt to the change in force too as the helicopter slows or turns to block the airstream on the weapon.  Gunners must engage the target, adapt to the airstream forces, and overcome the changes to keep on the target.